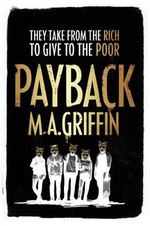 We have received 12 reviews of Payback. You can add a review or scroll down to read reviews. 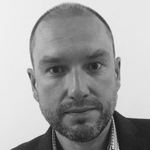 Martin Griffin has published novels under the names of both M. A. Griffin and Fletcher Moss. He says he goes by both names, depending on the day of the week.

Living in Manchester with his wife and daughter, he has spent over 20 years in high school teaching, including as a deputy head teacher. Other jobs have included shelf-stacking and van driving in France and Spain.

In 2012, he won the Times/Chicken House Children’s Fiction competition with his first novel, The Poison Boy.

Payback, an enigmatic anticapitalist group staffed by teens, has one mission: to steal from the rich and give to the poor. Its dramatic heists create a sensation. But when excitable Payback fan Tom is recruited, he accidentally brings with him a shady money man, Mr Ruiz. And he's not the only one on their tail. As the net closes in, the teenagers of Payback fight to stay alive - and true to their values. Being Robin Hood has never been this hard...

Martin Griffin has written a survival guide for NaNoWriMo, the National Novel Writing Month that runs each November.

He was a teacher when he wrote his first book, and he used the pen-name Fletcher Moss to keep it secret from his students.

Alderman Fletcher Moss was an author and botanist from Manchester, who persuaded the philanthropist Andrew Carnegie to fund the construction of a public library in Didsbury in 1915.

I will admit, Payback surprised me. I was expecting a washed out, cliché rendition of Robin Hood, and what I got was a political thriller that really made me question how our society works. It was un-put-downable during the ending (which some may argue was a little long and drawn out. I only mention this because I was previously unaware I could stay awake for that long) and most of the characters were well developed. Personally, political thrillers aren’t my preference and so this book wasn’t really for me, but if you want something that will make you think, your heart race and occasionally burst into spontaneous panic, this book is for you.

Poppy gave Payback 3 out of 5 and now plans to read The Sacrifice Box by Martin Stewart.

This book is so exciting and full of adventure. If there is a second book to this then I’ll definitely read it. ???

Elisha gave Payback 4 out of 5 and now plans to read The Sacrifice Box by Martin Stewart.

This book had a decent plot but I was rushing through to get to the end and I didn’t really feel like I was reading it, more just skimming through it. It wasn’t my type but I can appreciate it.

Evie gave Payback 2 out of 5 and now plans to read The Lost Witch by Melvin Burgess.

The whole time I was reading this book, I felt great suspense. Many different events linked with others making it almost impossible to put the book down and each mystery solved led to another discovered. Something was always happening in the book and it was very easy to become in love with the book.

The characters were great too, exploring the imperfections of humanity whilst also presenting them as ‘heroes’. The secrets kept me on edge the whole time and I couldn’t help but feel nervous for Rendall. I would definitely read this again and recommend it to other people.

E gave Payback 4 out of 5 and now plans to read The Lost Witch by Melvin Burgess.

The book follows Tom, a teenager who works at a hotel and how he becomes a member of the internet sensation, Payback, who behave as a modern Robin Hood group.

My favourite character was Tom because he is the main character and because he also shares my name which makes me feel connected. M.A Griffin kept the book realistic which helped me imagine the scene or characters as it is set in modern day. My favourite part of the book would be the start because it had a flashback of how he went from working at a hotel to becoming a member of Payback.

I unfortunately found the book a bit predictable as the blurb in my opinion revealed too much [ It practically revealed the whole plot]. At times I felt a little disconnected because there were a lot of different scenes and peoples' backgrounds. Sometimes I found it hard to imagine where they are and, in books, I always like lots of description.

This book was however still exciting and very fun to read and I would recommend it to all audiences.

Thomas gave Payback 4 out of 5 and now plans to read The Sacrifice Box by Martin Stewart.

'Payback'is about a hotel porter, named Tom, who accidentally got involved in a burglary by a group, Known as Payback. Payback, steal from the rich to give to the poor and Tom is a big fan, who is then recruited. However, Tom has connections to a police detective and a rich business man who Payback stole from - which soon brings chaos.

This book is really exciting - I could barely put it down! It had so many unexpected twists and turns and was so complex and interesting! I loved it!

My favourite character was kallie because she is an amazing at climbing -and I love climbing- as well as being a really strong and cool female character.

My favourite part is when they try to return some stolen items- because what happens is so shocking and unexpected. It is also when the tense part of the book, begins.

I would recommend this book to people who like mysteries and thrillers and have a lot of time- because you will not be able to put it down!

Emily gave Payback 4 out of 5 and now plans to read The Survival Game by Nicky Singer.

Payback is a story about a group, called Payback, who rob the rich and give the money made to the poor.

The book is indeed quite intriguing. I loved the concept of defying the saying ‘The poor get poorer, the rich get richer’, which does play a big part in modern society. Many leaders do take advantage of their power, using it to feed their greed. The book was packed with action and did keep me on the edge of my seat.

It was a unique story with a powerful message behind it; I loved that. However, the book didn’t really need to be as long as it was. The first half of the book was quite unnecessary, and seemed to drag on, which discouraged me from continuing reading the book. I do admit, however, that the ending was interesting and did tie the story to a curious end.

Diana gave Payback 2 out of 5 and now plans to read The Lost Witch by Melvin Burgess.

I found this book very easy to read and incredibly gripping. It has previously been described in three words as an electrifying political thriller, a description that I absolutely agree with. M.A Griffin has created an amazing and thoroughly believable story set in modern day Britain. This makes it even easier to empathise with and enjoy the many characters scattered throughout this book. Despite this, I do feel that there was little backstory and it was therefore hard to truly understand the characters and what they have been through. Nonetheless, the book is very enjoyable to read and even if the characters are somewhat unexplored, Griffin does still keep readers entranced by the constant fast-paced action of the narrative and the introduction of new vivid settings that are quickly absorbed by the reader.

Max gave Payback 4 out of 5 and now plans to read The Sacrifice Box by Martin Stewart.

This book is very much in the adventure category bringing myth and legend into the story through the Robin Hood aspect of the book. It is an epic page turner... There is an element of mystery and it is very intense at the end of the book in the way of gunshots, jumping out of trains and people falling through holes in damaged buildings.

Katie gave Payback 4 out of 5 and now plans to read The Survival Game by Nicky Singer.

The book Payback was written by M.A Griffin and is written from the point of view of the main protagonist Tom. Tom is a small youtuber who praises the group Payback. The group Payback are exactly like what they were described- a modern Robin Hood. But Tom joining the group causes leads trouble directly to them.

I personally didn’t like the book. The book had an amazing plot, dealing with social media and the trouble of social media, but I don’t think the book was written well to orchestrate the theme well enough. Instead unnecessary detail was put in which drove me away from what the book was actually about.

The book was also poorly structured. At the beginning, a lot of focus was put on the small parts that were irrelevant which discouraged me from actually reading the end half of the novel. I admit the ending of the novel was adventurous and intriguing but it took so long for it to get to that point.

I liked the book but the ending was rushed.

Rafeha gave Payback 4 out of 5 and now plans to read Rosie Loves Jack by Mel Darbon.

Payback, a group of modern day Robin Hoods, take from the rich, give to the poor and upload all their daring deeds onto social media.

Rich boy Tom is sacked from his night porter job in a hotel where a shady business man has made a friend of him. He has been following Payback on line so when he finds himself mixed up in one their heists he is keen to learn more about the vigilantes.

I enjoyed the story despite some of it being far-fetched, the ending was exciting, but again very outlandish. The characters are well written, the storyline is interesting, I did guess the ending but MA Griffin has left it with an opening to write a second novel.

Mrs gave Payback 4 out of 5 and now plans to read The Sacrifice Box by Martin Stewart.